ARE YOU DRIVING A CAR WITH A FAULTY AIRBAG?

Police are urging all drivers to recall their cars if their model is on the Australian Competition and Consumer Commission (ACCC) list as Takata has supplied air bags for Toyota, Honda, Ford, Nissan, BMW, Volkswagen and Daimler among many others.

Japanese auto parts maker Takata Corporation has pleaded guilty to fraud and agreed to pay a $US1 billion ($1.3 billion) penalty for concealing a deadly defect in millions of its air bags.

Takata’s inflators use ammonium nitrate to create a small explosion that inflates air bags in a crash.

But when exposed to prolonged high temperatures and humidity, the chemical can deteriorate and burn too fast with the force to blow apart a metal canister. 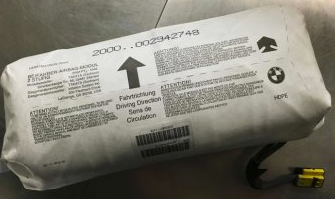 A Takata airbag inflator from a BMW

Consumers are urged to go to the Australian Government website: