In late 1918, after more than four years of bitter fighting, Allied forces finally broke stubborn German resistance and forced Germany to sue for peace. Entire nations cheered as fighting ceased and the armistice took effect at 11am on the 11th November 1918.

One year later the first commemorations to mark the end of the war were held across the Commonwealth on the 11th November 1919. At the request of King George V the people of the Empire ceased work at 11am to hold a two minute vigil to remember the fallen. This vigil would evolve into the minute’s silence of today’s Remembrance Day services.

By the end of the Second World War Armistice Day had grown from solely a remembrance of the men and women of the Great War into something larger, becoming a day to honour all those who had fallen in war. With this evolution came a change of name and 11 November became known as Remembrance Day.

Under this name Australians today remember all those who served and sacrificed during times of war and on peacekeeping operations in recent decades each November 11. Services are held at memorials, RSL clubs and schools across the country and 11am on this day, each including a minute’s silence dedicated to the fallen.

Armistice Day was also the date chosen for two key events at the Shrine of Remembrance – the foundation stone of Victoria’s Great War memorial was laid in 1927 and the Shrine was officially dedicated on 11 November 1934. The dedication was witnessed by more than 300,000 people, more than half the population of Melbourne and the largest crowd seen in Australia at that time. 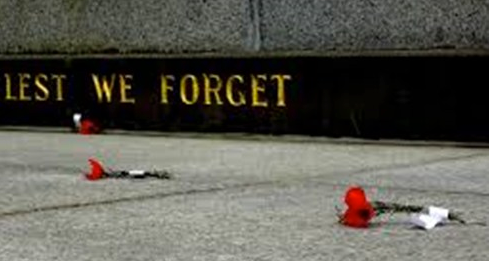 Unlike ANZAC Day, Remembrance Day is not a public holiday in Australia but services are held at 11am at War Memorials and cenotaphs in suburbs and towns across the country. Traditionally, the Last Post is sounded by a bugler followed by one minute of silence. After the minute of silence, flags are raised from half-mast to masthead as Rouse is played.

Remembrance Day is observed across the world in the United Kingdom, Canada, France, South Africa, The United States of America, Bermuda, Ireland and New Zealand as well as in Australia. In many of these locations, two minutes of silence is observed at 11am.

Men and women in Australia and around the world have made sacrifices, many have given their lives. Yet the freedom we enjoy was secured at a price. Since Federation, Australian units have served in the Boer War, the Boxer Rebellion, World War I, World War II, Korea, the Malayan Emergency, the Indonesian Confrontation, Vietnam, the Gulf War, the War against Terrorism in Afghanistan and Iraq, and in many Peace Keeping Operations around the world.