The 11th November marks the 99th anniversary of the Armistice which ended the First World War (1914–18). Each year on this day Australians observe one minute’s silence at 11 am, in memory of those who died or suffered in all wars and armed conflicts.

REMEMBRANCE DAY in ROMSEY and LANCEFIELD

WITH A WREATH LAYING CEREMONY at the

ALL COMMUNITY MEMBERS,
INCLUDING FAMILIES AND CHILDREN,
ARE INVITED TO ATTEND THIS SOLEMN EVENT

Following the Remembrance Day service
There is to be a special dedication:
THE LONE PINE TREE – DEDICATION PLAQUE

Time:  12 noon
The RSL and all members of the community are invited to attend the unveiling of a plaque depicting the planting of the Lone Pine tree.

Sponsored by the Romsey-Lancefield Rotary club

WHY a RED POPPY? 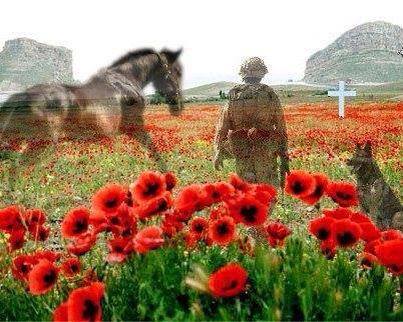 Since 1920, the red poppy has been used as a symbol of commemoration to soldiers who have fallen in times of war. During the First World War, poppies were among the first plants to blossom on the devastated battlefields of northern France and Belgium. According to soldier’s folklore, the vivid red of the poppy came from the blood of their comrades soaking the ground. Poppies grew in profusion over the earth which had become the grave to thousands of soldiers, making the poppy an appropriate symbol to represent the sacrifice of life and the bloodshed of trench warfare.

The sight of poppies springing up amidst the ravaged battlefields of Ypres inspired Lieutenant Colonel John McCrae to write one of the most notable and popular poems of the period, In Flanders Fields. It is believed that the poem was written on May 3rd 1915 after McCrae witnessed the death of his 22 year old friend, Lieutenant Alexis Helmer the day prior.

The tradition of wearing a poppy began just before the armistice in 1918. The secretary of the American YMCA, Moina Michael, read John McCrae’s poem and was so moved by it that she decided to partake in a personal commemorative ritual of wearing a red poppy. She believed this was a powerful way of keeping alive the faith that John McCrae had urged in his poem. In November 1918, a meeting was held with YMCA secretaries from around the world providing Moina Michael with a chance to discuss the poem and her decision to wear a red poppy. This inspired the French YMCA secretary, Anna Guérun to take the idea further and begin selling poppies to raise money for those affected by the war – particularly widows, orphans, veterans and their families.

The poppy soon became widely accepted throughout the allied nations as a symbol of remembrance which was to be worn on Armistice Day. Poppies were first sold in Australia in 1921 and continue to be sold by the RSL in the lead up to Remembrance Day every year to raise the much needed funds for the organisation’s valuable welfare work.

In Flanders’ fields the poppies blow

Between the crosses, row on row,

That mark our place; and in the sky

Scarce heard amid the guns below.

We are the Dead. Short days ago

Loved and were loved, and now we lie

Take up our quarrel with the foe;

To you from failing hands, we throw

The torch; be yours to hold it high

If ye break faith with us who die

We shall not sleep, though poppies grow

Colonel McCrae learned of his appointment as consulting physician to the First British Army while in a military hospital. He died within a week of the announcement, on the 28th of January and was buried with full military honours in the cemetery at Wimereux, France.